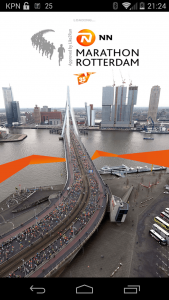 Today the Rotterdam Marathon took place. Also for this marathon, a smartphone app had been developed. I think most users for such apps are the supporters, who want to track their favourite runners, along the side of the route or from home.

There is some innovation, but clearly not much thought was given to how this app would be used, and how this could be made more easy.

Why is this format not good, and how can it be improved?

First the innovations. At previous apps, I have seen there was a map of the route, but what was new to me in this app, was the ability to see the position of the runners—at least, the last tracking point where they passed. According to the map, the runners I was tracking were now, hours after the finish, still at the 40 km point, but the principle is nice.

It can be made even better: instead of the position of the last tracking point, present the position where they are now, assuming they continued running at the same pace. When you are watching along the route, that would make it easier to estimate when they will pass.

Another nice feature is that, if a runners brings along his smartphone, it can be tracked using its GPS. None of the runners I was tracking used this, so I cannot say how it worked, but I like the idea.

But live tracking runners remains a problem. It starts with getting regular updates. Today, during the first hour it was fine, after that no more updates. During the remaining part of the marathon, one or two times only a single passing of a tracking point was reported. Only half an hour after they finished, it was shown in the app. Why can this not be arranged reliably?

Few things are as predictable as the number of runners that pass a tracking point during a marathon, and with current cloud services, one can buy as much computer capacity as needed just for those hours that it is needed. So no reason why tracking the runners can not be done reliably and send to an app immediately. Still, it often fails. Why ??? 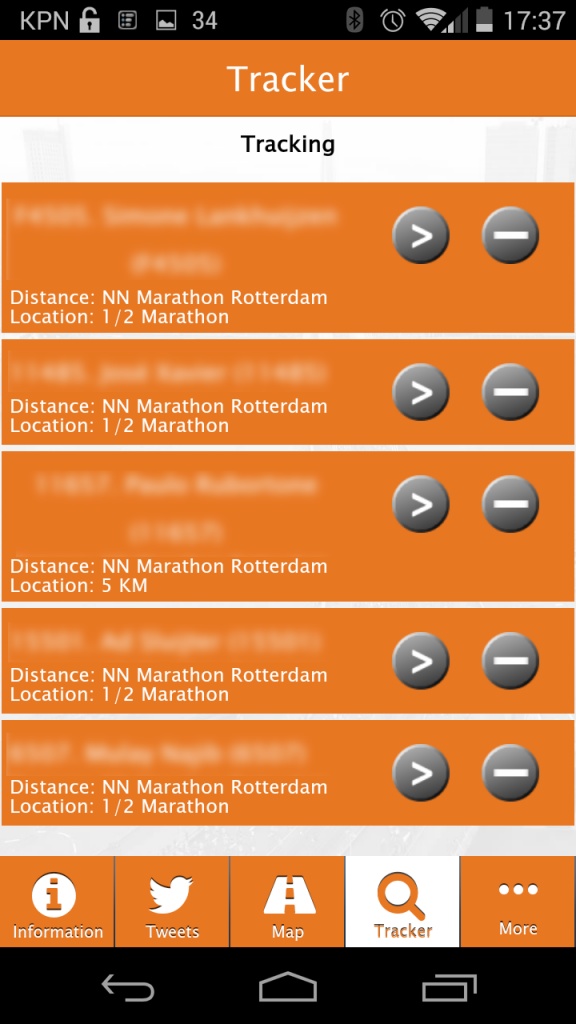 What if tracking goes well, and the information comes to your app nicely in time? The first thing you see it the overview of the runners, as in the picture. By now, they have all finished, showered and are home already, but the location indicated in the app still says they are at the 1/2 marathon point.

If this would be working well, it would be the only indication that new information has arrived, but in practice, you keep clicking regularly on each runner to see if there is an update. Cumbersome, while it could be so much easier: 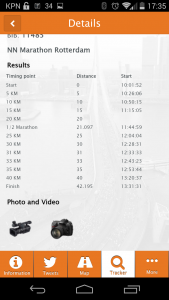 After clicking on one of the runners, you see a table with the information as it is registered by the tracking system, but not immediately useful. First, you have to calculate to make any sense of it. But isn’t calculation something an app can do much better than we can?

The time is the the moment that the runner passes a tracking point. That is only useful if you are watching along the route a bit further on, so you can calculate when to expect him.

Even then: the smartphone has a GPS, so the app can know where you are and calculate immediately when one of the runners will pass by, and show this time, perhaps even give a warning a little earlier.

What is actually useful to know:

Do I need to explain that, with the information under Timing Point, the Distance column is largely redundant? Except for those that do not know that a marathon is 42.195 km, and therefore a half marathon is 21.097 km, but this information can be placed in a footnote.

Actually, it is a really nice system, running with a chip so your supporters can track you. Recording and storing the information seems to work fine, I can not recall any recent issues with that. But sharing in real time via Internet is still troublesome, and it should not be with the currently available technical options, and more thought should be given to make the apps really user friendly.

If the tools and articles are useful to you, please consider a donation to support further work. Many thanks!